China Has No Intention To Fight Either “Cold” Or “Hot” War: Xi Jinping 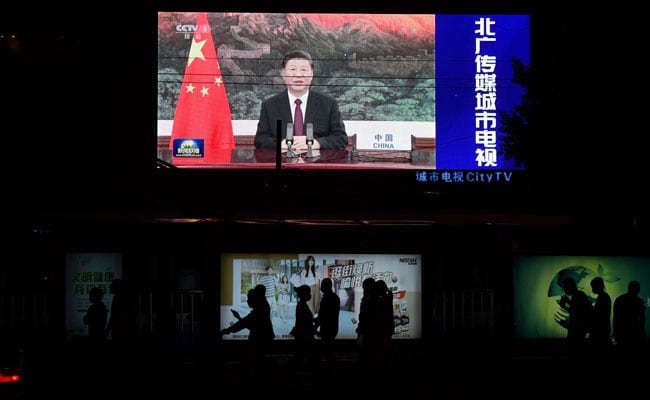 China will never seek hegemony, expansion, or sphere of influence, President Xi Jinping said on Tuesday and said Beijing has no intention to fight either a “Cold War” or a “hot war” with any country.

Xi also said that China will continue to narrow the differences and resolve disputes with others through negotations, in comments that came in the backdrop of the tense military standoff between Chinese and Indian armies in eastern Ladakh for over four months.

Addressing the general debate of the 75th session of the United Nations General Assembly, he said, “We will continue to narrow differences and resolve disputes with others through dialogue and negotiation.”

“We will never seek hegemony, expansion, or sphere of influence. We have no intention to fight either a Cold War or a hot war with any country,” Xi said in a pre-recorded video message to the UN meeting.

Prime Minister Narendra Modi, during a surprise visit to Ladakh on July 4, had said the era of expansionism is over and that the history is proof that “expansionists” have either lost or perished, in comments that were seen as a clear message to China.

Xi, also the General Secretary of the ruling Communist Party of China and the Commander-in-Chief of the Chinese military, said his country will not pursue development behind closed doors.

“Rather, we aim to foster, over time, a new development paradigm with domestic circulation as the mainstay and domestic and international circulations reinforcing each other. This will create more space for China’s economic development and add impetus to global economic recovery and growth,” he said.

The Chinese president also addressed the issue of the COVID-19 pandemic and international criticism about China’s attempts to suppress details about the outbreak.

“Facing the virus, we should enhance solidarity and get this through together. We should follow the guidance of science, give full play to the leading role of the World Health Organization, and launch a joint international response to beat this pandemic. Any attempt of politicising the issue or stigmatisation must be rejected,” Xi said.

Earlier, US President Donald Trump blasted China on Tuesday for “unleashing” the plague of the “China virus” onto the world, demanding that the United Nations must hold Beijing accountable for failing to contain the coronavirus that has killed nearly one million people across the world, including 200,000 Americans.

Trump demanded that China, where the coronavirus emerged, be held accountable for failure to control the virus and for allowing it to spread across the world.

“As we pursue this bright future, we must hold accountable the nation which unleashed this plague onto the world: China,” he said.

The COVID-19 pandemic has so far infected over 30 million people and more than 958,000 people have died. The US, with 6.7 million infections, crossed the grim milestone of 200,000 deaths.

“The Chinese government, and the World Health Organization — which is virtually controlled by China — falsely declared that there was no evidence of human-to-human transmission,” Trump said.

“Later, they falsely said people without symptoms would not spread the disease. The United Nations must hold China accountable for their actions,” he said.

Trump has repeatedly blamed China for the coronavirus pandemic which originated in the central Chinese city of Wuhan in December last year and accused Beijing of suppressing the details of the contagion.

Relations between the US and China have plummeted during Trump’s time in office, with a trade war, tit-for-tat expulsions of diplomats, and angry denunciations coming from both Washington and Beijing.
In his address, Xi also stressed that no country can gain from others’ difficulties or maintain stability by taking advantage of others’ troubles.

“To pursue a beggar-thy-neighbor policy or just watch from a safe distance when others are in danger will eventually land one in the same trouble faced by others,” he said.

“We should reject attempts to build blocs to keep others out and oppose a zero-sum approach. We should see each other as members of the same big family, pursue win-win cooperation, and rise above ideological disputes and do not fall into the trap of “clash of civilisations,” he said.

More importantly, he said one should respect a country’s “independent choice of development path and model.”

The world is diverse in nature, and we should turn this diversity into a constant source of inspiration driving human advancement. This will ensure that human civilisations remain colourful and diversified, Xi said, amidst Western pressure on the ruling Communist Party to change.