Facebook India Vice President Ajit Mohan has moved the Supreme Court against a notice from the Delhi Assembly’s “Peace and Harmony” committee over the social media platform’s alleged complicity in the violence that struck the national capital in February.

A three-member bench of the top court – consisting of Justices SK Kaul, Aniruddha Bose and Krishna Murari – will hear the plea tomorrow via video conferencing.

Mr Mohan is to be represented by former Attorney General Mukul Rohatgi.

In his petition the Facebook India chief said the Delhi Assembly’s committee could not compel him to appear before it, since the same issue was already before a parliamentary panel.

On Sunday the committee had sent a fresh and “final” summons to Facebook India, to appear over allegations of “deliberate inaction on the part of (the) social media platform to apply hate speech rules”.

Mr Mohan had been asked to appear tomorrow.

This was days after Facebook India executives, including Ajit Mohan, snubbed an earlier summons.

In a written response Facebook India said they had already appeared before a parliamentary panel on this issue and, therefore, the Delhi Assembly should withdraw its summons.

Mr Mohan, in his petition, also pointed out that Delhi Police, which last week filed a contentious 17,000-page chargesheet in connection with the violence, reported to the centre and not Delhi’s ruling AAP. 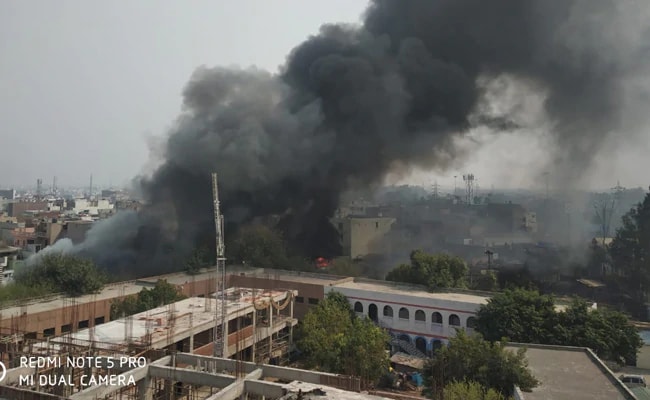 Homes were burnt, vehicles were vandalised and people were lynched during the Delhi violence

He also questioned the AAP declaring Facebook was “prima facie guilty” and calling for a supplementary chargesheet. Mr Mohan said the party could not make such statements as it was not a court of law.

The “Peace and Harmony” committee was set up by the Delhi Assembly (where the ruling AAP holds 62 of 70 seats) after riots over the Citizenship (Amendment) Act killed over 50 people and injured hundreds.

The committee’s decision to summon Facebook India was over complaints of “deliberate and intentional inaction to contain hateful content” in the country.

This was after reports by US publications cited interviews with unnamed insiders alleging that hate speech rules were not applied in the case of inflammatory posts by BJP leaders and right-wing activists.

One report, by TIME magazine, referred to a video by BJP leader Kapil Mishra – a video that was among several by BJP leaders played by the Delhi High Court in its hearing on the matter.

In response Facebook has insisted that it applies hate speech rules uniformly and without any consideration to political parties that may be involved.

The social media giant has already met a parliamentary panel – headed by Congress MP Shashi Tharoor – once this month and is due to appear before that panel again.

The US media reports triggered a political row between the BJP and the Congress, which has written letters to Facebook founder Mark Zuckerberg.