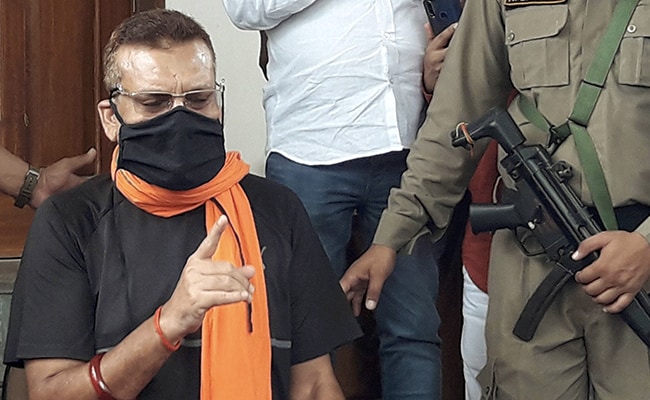 Gupteshwar Pandey, who quit the post of the Bihar police chief on Wednesday, gave what appeared a clear hint of his future plan by the end of the day. Since Tuesday, when he put in his papers, there was a strong buzz that the former police chief will take the high road to politics, contesting the coming state elections on an NDA ticket from his hometown Buxar. But Mr Pandey has not been very forthcoming.

“What’s the harm if I join politics? Is it unconstitutional, unethical or illegal?” the former Director General of Police told NDTV on Wednesday evening.

“I am the people’s DGP. Janta ka DGP. The junta of Buxar will decide what my next step should be, whether they want me to join politics or not… I’m a son of the soil. I have served in 34 districts,” he said.

On Wednesday, a music video titled “Robin Hood of Bihar” made its appearance on YouTube, where the former police chief was portrayed as a crusader hero.

Lyricist and composer Deepak Thakur, who also appears in the video, had made a special mention of the Sushant Singh Rajput case, which has become an emotive issue in the state ahead of the election.

Mr Pandey has not only been at the forefront of the case, nudging it all the way to the Supreme Court, he had also been vocal about it.

His statements about Chief Minister Nitish Kumar being unfairly targeted were seen as unusually political for a police chief. His statement about Sushant Rajput’s friend Rhea Chakraborty’s not having the “aukat (stature)” to comment on Nitish Kumar, had drawn criticism.

Mr Pandey yesterday had insisted that he is known for his work in the police which has been “impartial”.

As the Bihar government accepted his resignation and waived the three month cooling-off period, Mr Pandey had appeared before the media yesterday, nattily dressed in civilian black.

Asked about allegations that he wanted to use the Sushant Rajput case as political capital, he said, “Only those who feel threatened by me and have a low mentality will say such things”.

The former police was known to have political ambitions, especially with his unsuccessful effort in 2009 to contest national elections from the Buxar parliamentary constituency. “It is true that I am interested in politics. But I was anari (naive) then and I am anari now,” he had told the media.