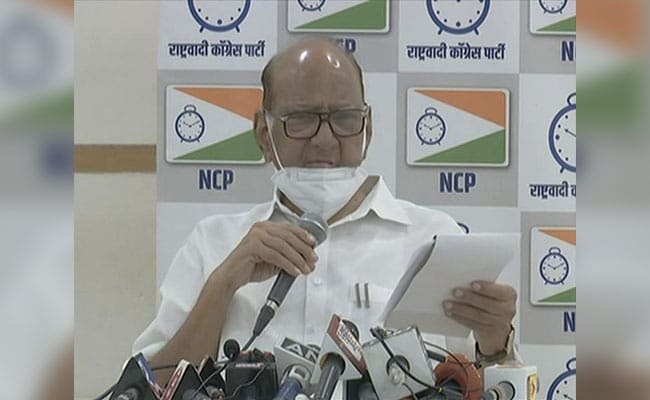 Veteran Maharashtra leader Sharad Pawar today announced a one-day fast to express solidarity with eight Rajya Sabha members suspended over chaos during a vote on controversial farm bills. The Congress and other opposition parties have announced a boycott of the Rajya Sabha for the rest of the session unless the suspension is revoked.

“I will not eat anything today in solidarity with the protesting members,” Sharad Pawar, a Rajya Sabha member of the Nationalist Congress Party (NCP), told reporters.

On Sunday, two farm bills were passed through a voice vote in Rajya Sabha amid massive opposition protests. A rulebook was flung at the Chair, two members climbed a table, papers were torn and tossed in the air and mics were ripped off as the opposition tried to block the vote.

The opposition has accused Deputy Chairman Harivansh, who was in the Chair at the time, of helping the government rush the bills through despite its lack of numbers. The parties allege that their demands for more discussion on the bills were rejected, and a voice vote was forced in the house.

“I have never seen bills being passed like this. Members were expelled for expressing their opinion. The Deputy  Chairman has not given priority to the rules,” the former union minister said, defending the opposition protests.

Mr Pawar also accused the central government of pursuing an agenda against political opponents as he referred to tax notices.

The NCP chief said the Income Tax department has served him notice asking for “clarification and explanation” on his election affidavits.

“I got the notice yesterday. We are happy that they (the Centre) love us among all the members. The notice was served by Income Tax after the Election Commission asked (it) to…We will reply to the notice,” he said.

“I got notice from the Income Tax Department in reference to the affidavit I submitted in 2020 and 2014 and 2009-10. They are asking for some information and clarification and similarly they have asked this to Supriya (Sule) also for the last three elections,” he said.

The farm bills, cleared in both houses, will go to President Ram Nath Kovind for his assent before they become law.

The government says the bills will make it easier for farmers to sell their produce directly to big buyers, will reform an outdated system and remove middlemen from the equation, allowing farmers to sell to institutional buyers and large retailers. The opposition argues that farmers will lose their bargaining power if retailers have tighter control over them. The parties also claim the proposed laws will destroy wholesale markets which ensure fair and timely payments to farmers and hit state economy.