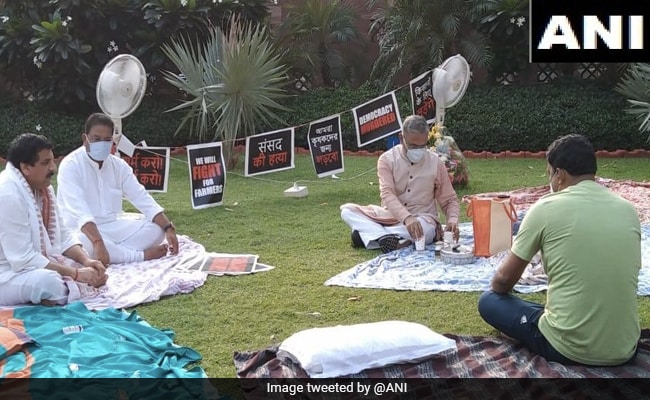 Eight opposition members of the Rajya Sabha, suspended yesterday over the massive chaos when controversial farm bills were passed on Sunday, spent the night on the lawns of the parliament complex and declared that they were on an indefinite protest. They had yesterday refused to leave the Rajya Sabha, which was adjourned five times.

When the members, including Trinamool Congress’s Derek O’Brien, Aam Aadmi Party’s Sanjay Singh, Congress’s Rajeev Satav and CPM’s KK Ragesh, did leave the Rajya Sabha, they moved their protest to the parliament lawns, near Mahatma Gandhi’s statue, where they spread out sheets and sat holding up placards that read – “We will fight for farmers” and “parliament assassinated”.

This morning, Rajya Sabha Deputy Chairman Harivansh walked over to them and offered them tea, but they rebuffed his “tea diplomacy”, calling him “anti-farmer”.

The opposition’s protest is mainly against the Deputy Chairman; their no-confidence motion against him was rejected yesterday by Chairman Venkaiah Naidu.

With pillows, blankets, two fans and mosquito repellants, the suspended members pulled off their first all-nighter. “We would like the government to know that this is an indefinite protest,” Derek O’Brien told reporters.

AAP’s Sanjay Singh said, “We will continue protesting against the farmer bills until the Modi government provides a rationale behind passing these bills without having the required votes”.

Opposition members accuse the Deputy Chairman of helping the government rush through the farm bills in the Rajya Sabha on Sunday without following democratic process. Mr Harivansh had rejected their calls for sending the bills to a select committee for review or even to extend the discussion till Monday. The bills were passed with a voice vote after the Chair rejected opposition calls for physical voting and a division of votes.