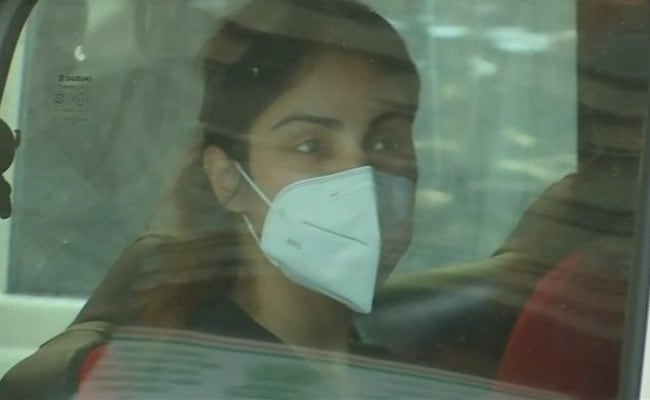 Rhea Chakraborty was arrested on September 9 on drugs charges. (File)

Actor Rhea Chakraborty, in her second request for bail after two weeks in a Mumbai jail, has alleged a witch-hunt against her by the Narcotics Control Bureau at the instance of three central agencies that specialize in “investigations of international ramifications” but have found no evidence against her. She also alleges that Sushant Singh Rajput “took advantage of those closest to him to sustain his drug habit”.

The bail requests of Rhea Chakraborty and her brother Showik will be heard tomorrow by the Bombay High Court. It was put off by a day due to heavy rain in Mumbai.

Rhea Chakraborty was arrested on September 9 on drugs charges linked to the investigation into the death of Sushant Singh Rajput, her boyfriend, on June 14. She was described by the Narcotics Control Bureau as “an active member of a drug syndicate”. Her judicial custody was yesterday extended to October 6.

In her bail plea, Rhea Chakraborty says it is clear that “Sushant Singh Rajput was the only consumer of drugs and that he was directing his staff members to procure his drugs”. She also says “if the late actor were alive today, he would have been charged for the consumption of small quantities, which is a bailable offence having punishment of a term of imprisonment upto one year.”

It is “preposterous”, she argues, that while the “consumer of drugs” would receive a maximum punishment of up to one year jail, she would, having paid for the drugs on a few occasions, would be subjected to up to 20 years in jail.

Sushant Singh Rajput, says Rhea Chakraborty, “used her, her brother Showik and members of his household staff to facilitate his own drug habit while ensuring that he did not leave a paper trail of his own in the form of any electronic evidence whatsoever”. She also said: “It is unfortunate that Sushant Singh Rajput took advantage of those closest to him to sustain his drug habit and thought it fit to expose them to the perils that would entail”.

She says that based on information in the public domain, Sushant Singh Rajput had asked his cook, Neeraj, “to make ganja joints/rolls/doobies and place them in his bedroom” three days before his death. She said Neeraj had told the CBI and Mumbai Police that he had prepared the joints and placed them in a box in his bedroom and “thereafter when the actor was found dead, he verified from the box that all the joints/doobies had been consumed and the entire box was empty”.

“Therefore it is clear from the evidence collected by investigative agencies that it was only late Sushant Singh Rajput who was the consumer of drugs and who was in the habit of using those around him to facilitate his drug habit,” Rhea Chakraborty’s bail plea says.

She also says in the 47-page petition that Sushant Singh Rajput’s ties with his family were strained and alleges that his sisters left him at the “peak of his depression”.

The petition says Sushant Singh Rajput was “in the regular habit of smoking cigarettes with ganja” since before they met, a habit he allegedly got into during the shoot of his movie “Kedarnath”.

The prosecution’s entire case was that she allegedly bought drugs for Sushant Rajput, says the petition. “Apart from allegedly coordinating the purchase of drugs and occasionally paying for the said purchase, there is no other allegation, yet the prosecution is terming her alleged acts as ‘financing illicit traffic’,” says Rhea Chakraborty, adding that allegations against her would come within the ambit of “less serious offences”.