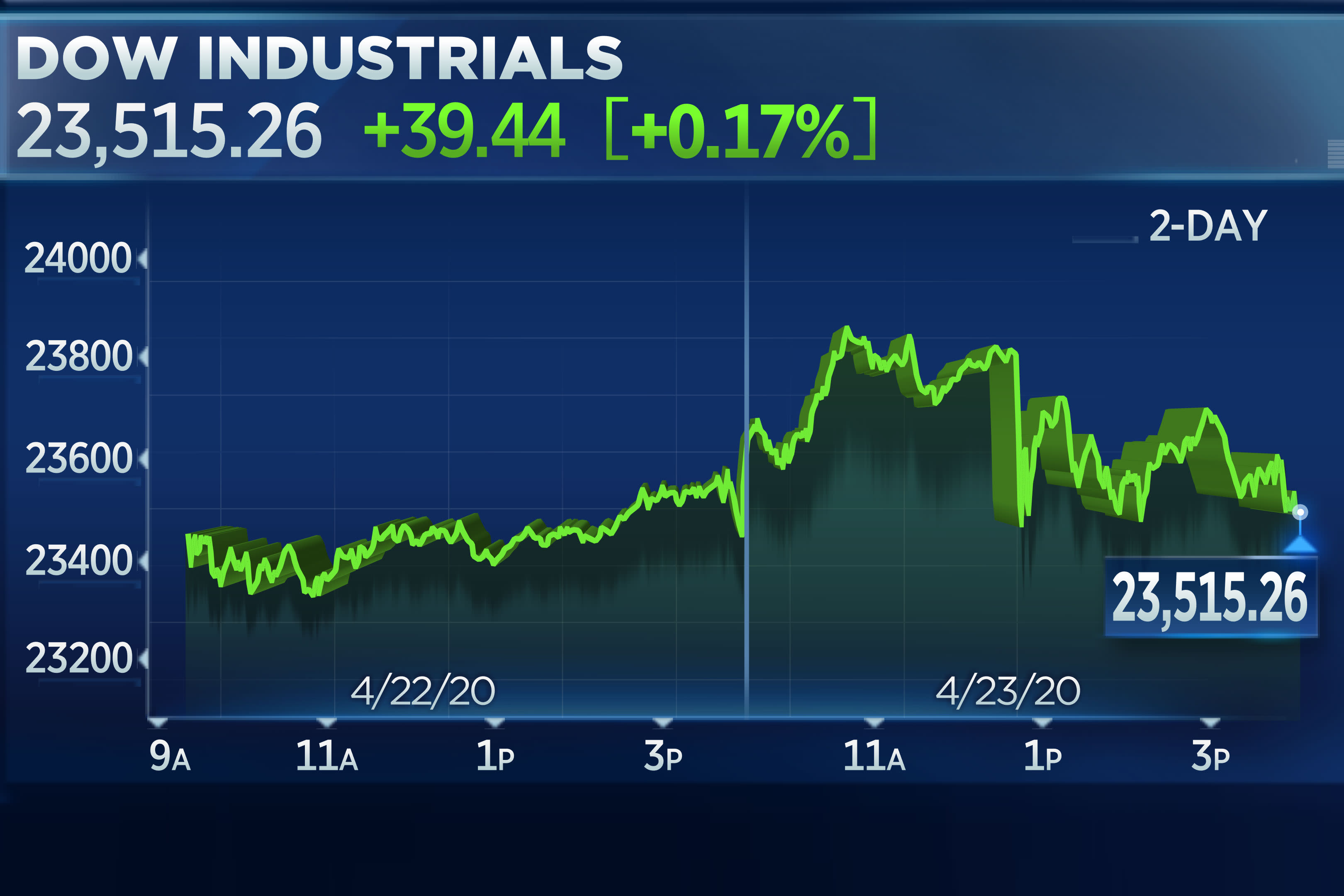 Stocks were taken for a wild ride on Thursday that showed just how important finding a treatment for the coronavirus is for Wall Street.

The Dow Jones Industrial Average slashed a 400-point gain and nearly went negative after The Financial Times said  — citing documents accidentally published by the World Health Organization — that Gilead Sciences’ drug remdesivir did not improve patients’ condition or reduce the coronavirus pathogen in their bloodstream. Those findings, according to the report, came from a clinical trial in China.

The S&P 500 and Nasdaq Composite cut their gains on the report, while Gilead was briefly halted for volatility.

But the major averages rebounded after Gilead took issue with the report, saying: “Because this study was terminated early due to low enrollment, it was underpowered to enable statistically meaningful conclusions. As such, the study results are inconclusive, though trends in the data suggest a potential benefit for remdesivir, particularly among patients treated early in disease.”

“Any sort of treatment is key for people to getting people back out into the world,” said Kim Forrest, founder of Bokeh Capital, on CNBC’s “The Exchange.” “When the results were announced of the trial last week, you could see the market react and it was a sigh of relief that, if I get this, I may not die.”

Earlier in the week, concerns over a lack of energy demand sent WTI’s May contract — which expired Tuesday — into a negative price. Crude prices are also down sharply year to date even after their strong gains over the past two days.

“The resulting price action is highly damaging for many oil producers, and certainly implies a sharp fallback in US shale fracking, contributing to much weaker US exports and capex later this year,” wrote Charles Dumas, chief economist at TS Lombard.

Oil’s rebound helped equities claw back some of their steep losses from earlier in the week. Between Monday and Tuesday, the S&P 500 and Dow dropped more than 4% before rallying around 2% on Wednesday.

“Large single day advances can’t alone solve the market’s woes. But they can be part of the solution,” said Frank Cappelleri, executive director at Instinet, regarding Wednesday’s gains.

He noted the average gain for the S&P 500 since the March bottom has been much larger than its average decline. “This kind [of] scenario is what helps bullish patterns succeed and bearish patterns fade away… which is what we’ve seen happen over the last month of trading.”

The major averages have staged a massive rebound since hitting a coronavirus-crisis low on March 23. In that time, the Dow, S&P 500 and Nasdaq are all up over 20%. Still, the major averages remain well below the record highs set in February.

Another 4.4 million workers filed for unemployment benefits last week, according to data from the Labor Department. That brought the five-week jobless claims total to more than 26 million, erasing all the job gains since the Great Recession. However, Thursday’s print represented a decline from the jobless claims number reported in the previous week.

“The decline in initial jobless claims … is encouraging, but the damage has already been done,” said Paul Ashworth, chief U.S. economist at TS Lombard. He added, however, that the “easing of lockdowns may have pulled some people currently on temporary layoff back into paid employment. If so, then April’s unemployment rate could prove to be the pandemic peak.”

On the earnings front, CSX shares gained more than 1% after the railroad company posted quarterly profits that beat expectations. Union Pacific also got a boost from stronger-than-forecast earnings.

Click here for the latest news on the coronavirus.

Subscribe to CNBC PRO for exclusive insights and analysis, and live business day programming from around the world.