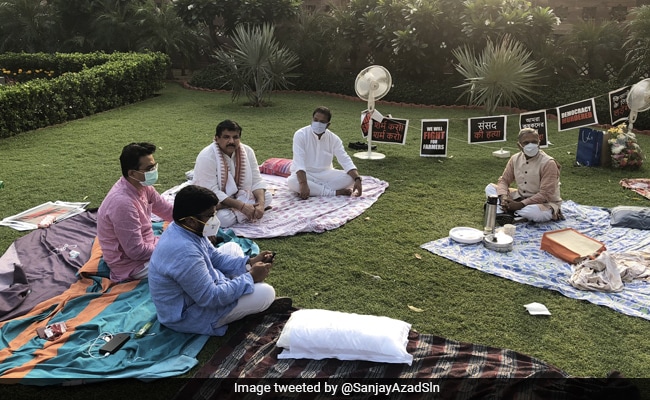 Eight opposition members of the Rajya Sabha, suspended yesterday after massive chaos during a vote on controversial farm bills on Sunday, have ended their protest after spending the night on the lawns of the parliament complex. The members said they would join the opposition’s boycott of the Rajya Sabha to press for demands including that their suspension is revoked.

This morning, Rajya Sabha Deputy Chairman Harivansh – the target of the opposition’s anger — went to them and served them tea but they rebuffed his “chai diplomacy”, calling him “anti-farmer”. Mr Harivansh has now announced a one-day fast against the “unruly behavior of the opposition”.

Prime Minister Narendra Modi came out strongly in support of Harivansh. “To personally serve tea to those who attacked and insulted him a few days ago as well as those sitting on Dharna shows that Shri Harivansh Ji has been blessed with a humble mind and a big heart. It shows his greatness. I join the people of India in congratulating Harivansh Ji,” PM Modi tweeted.

For centuries, the great land of Bihar has been teaching us the values of democracy. In line with that wonderful ethos, MP from Bihar and Rajya Sabha Deputy Chairperson Shri Harivansh Ji’s inspiring and statesman like conduct this morning will make every democracy lover proud.

To personally serve tea to those who attacked and insulted him a few days ago as well as those sitting on Dharna shows that Shri Harivansh Ji has been blessed with a humble mind and a big heart. It shows his greatness. I join the people of India in congratulating Harivansh Ji.

The Deputy Chairman is at the heart of opposition protests over the manner in which two farm bills were passed in the Rajya Sabha on Sunday; their no-confidence motion against him was rejected yesterday by Rajya Sabha Chairman Venkaiah Naidu.

Aam Aadmi Party’s Sanjay Singh, one of the suspended members, said, “We told him that rules were violated to pass the bills even when the government did not have numbers. He did not do anything to stop it. We will continue our protest against the betrayal of farmers.”

With pillows, blankets, two fans and mosquito repellants, the suspended members pulled off their first all-nighter. “We would like the government to know that this is an indefinite protest,” Trinamool Congress leader Derek O’Brien told reporters.

The members, including Derek O’Brien, Sanjay singh, Congress’s Rajeev Satav and CPM’s KK Ragesh, had yesterday refused to leave the Rajya Sabha, which was adjourned five times. When they did leave the House, they moved their protest to the parliament lawns, near Mahatma Gandhi’s statue, where they spread out sheets and sat holding up placards that read – “We will fight for farmers” and “parliament assassinated”.

Opposition members accuse the Deputy Chairman of helping the government rush through the farm bills in the Rajya Sabha on Sunday without following the democratic process. Mr Harivansh had rejected their calls for sending the bills to a select committee for review or even to extend the discussion till Monday. The bills were passed with a voice vote after the Chair rejected opposition calls for physical voting and a division of votes.