The turf war between Bihar Police and Mumbai Police over the probe into the death of actor Sushant Singh Rajput took a more serious turn after the Bihar police chief accused Mumbai Police of “forcibly” quarantining an officer sent to Mumbai to lead the probe. Bihar Chief Minister Nitish Kumar has reacted to the tussle, saying it is “not political”.

Nitish Kumar said this morning, “Whatever happened to him (Vinay Tiwari) is not right. It is not political. Bihar Police is carrying out its duty. Our DGP will speak to them.”

The Bihar police chief, in late-night tweets, alleged that a senior IPS officer sent from Patna was “forcibly quarantined” by civic authorities in Mumbai.

“IPS officer Vinay Tiwari reached Mumbai today from Patna on official duty to lead the police team there but he has been forcibly quarantined by BMC officials at 11pm today,” Bihar Director General of Police (DGP) Gupteshwar Pandey tweeted late last night, along with a photo of the officer’s hand that has a quarantine stamp showing the isolation period till August 15. 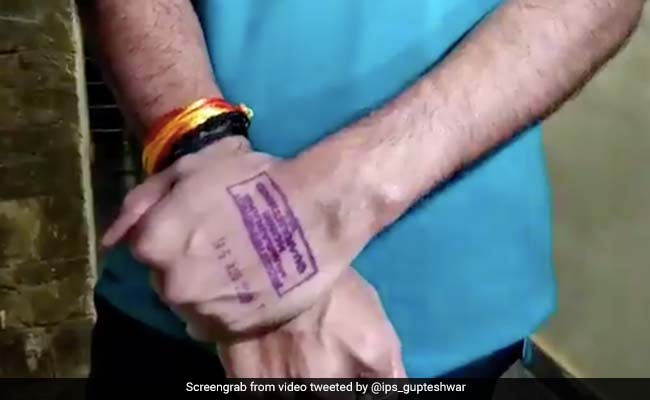 Patna police officer Vinay Tiwari was quarantined by the Brihanmumbai Municipal Corporation (BMC) with his hand stamped indicating the isolation period till August 15.

“He was not provided accommodation in the IPS Mess despite request and was staying in a guest house in Goregaw (Goregaon),” the Bihar police chief said.

Police officer Vinay Tiwari has been quarantined “as per the present guidelines for domestic arrivals at Mumbai Airport”, Mumbai’s civic body said. Mr Tiwari reached Mumbai on Sunday to aid the junior officers already in the city. Another tweet posted by the state police chief has a video of Mr Tiwari, in a blue t-shirt and a mask, showing his quarantine stamp.

Meanwhile, Mumbai Police sources say that while they have offered full cooperation to the team from Patna, the Bihar Police team has not followed protocols and courtesies that are due while conducting investigations in the jurisdiction of another force, especially when there is an on-going investigation.

Sources say Bihar Police has not kept Mumbai Police informed about its moves and the people it wants to question in connection with Sushant Singh Rajput’s death in June. After reaching Mumbai on Sunday, Mr Tiwari said he was in the city to supervise his team and that they will probe all possible angles in the case. “Mumbai Police are probing the case as per their style and we will do so as per ours. If required. We will also record the statements of Bollywood celebrities whose statements were recorded by the Mumbai Police,” he said. “The investigation is progressing in a proper way and we are going in the right direction. Our team is here to get all the important documents related to the case,” he added.

“We are trying to speak with the DGP and other officials there. I don’t have more to say on this,” Mr Pandey said this morning.

”I condemn this incident. I would like to ask Maharashtra Chief Minister and Home Minister that the entire country wants to solve Sushant Singh Rajput’s death mystery. Bihar Police officials have been coming to Mumbai nowadays in connection with this case but you are not supporting them. You did not quarantine them but when an IPS officer came ahead to solve this case, he was forcibly quarantined,” said Vinod Mishra, a corporator and BJP leader in Municipal Corporation of Greater Mumbai (MCGM), said.

Sushant Singh Rajput, 34, was found dead in his Mumbai apartment on June 14.

The Bihar police started a parallel investigation after the actor’s family filed a case in Patna.

This investigation is focused on charges that money was transferred from Sushant Singh Rajput’s bank account.

Mumbai Police has so far recorded statements of nearly 40 people, including those from the actor’s family, his cook as well as people from the film industry including filmmaker Mahesh Bhatt.