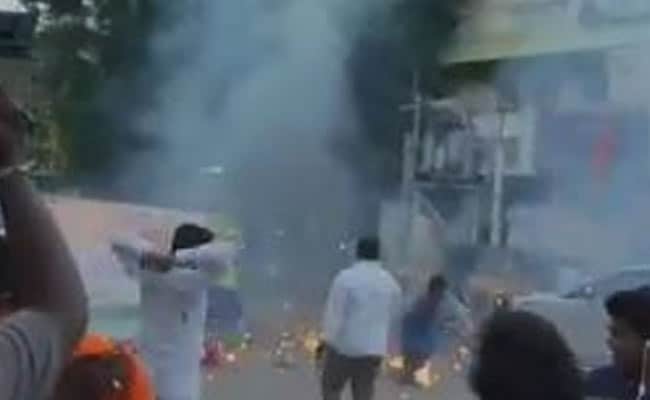 The BJP workers were injured in an explosion in Chennai.

Over a dozen BJP workers were injured when they were celebrating Prime Minister Narendra Modi’s 70th birthday on Thursday in Tamil Nadu’s Chennai.

A video shows a large number of BJP workers celebrating with helium balloons amid fireworks, just before an explosion forces them to disperse.

The helium balloons, which they are holding, catch fire, throwing the partymen into a tizzy. Some of them are seen trying to douse flames near a large poster of the Prime Minister.

The moments of chaos, right after the explosion, are caught on camera. The road is crowded and some men are seen telling people to clear up the site. Visuals also show cops trying to take a stock of the situation.

However, a senior police officer told NDTV: “We don’t know what was used – helium or hydrogen. We’ve registered a case of violating social distancing and prohibitory orders”.

The celebration is being seen as a violation of prohibitory orders in the state, which doesn’t allow assembly of more than five people.

More than a dozen BJP workers injured in an explosion in Chennai as fireworks strike helium balloons they held during celebrations on PM Modi’s birthday. The gathering was in violation of prohibitory orders in the city.. pic.twitter.com/WMPB7n1Rb2

PM Modi turned 70 on Friday. World leaders and politicians and celebrities across the country wished him on Twitter.

“Since many have asked, what is it that I want for my birthday, here is what I seek right now: Keep wearing a mask and wear it properly. Follow social distancing. Remember ‘Do Gaj Ki Doori.’ (a distance of two yards). Avoid crowded spaces. Improve your immunity. Let us make our planet healthy,” PM Modi tweeted on Friday night thanking  everyone who wished him as he also referred to the rise in coronavirus cases across the country.

The ruling BJP had organised various events like distribution of ration among the needy, blood donation camps and eye-check up camps to mark PM Modi’s 70th birthday.