The attack took place in Gurgaon on Friday around 9 am.

With impunity and a hammer, an unarmed man is savagely beaten and kicked to pulp while the police and dozens of people do little more than watch, shows the video, demonstrating the horrific collapse of law near the country’s capital.

Around 9 am on Friday, not too far away from Gurgaon’s glistening towers that house the offices of multinational software companies, a group of cow vigilantes chasing a pick-up truck for about 8 km managed to flag it down.

The driver, identified as Lukman, was pulled out and brutally assaulted on the suspicion that he was smuggling cow meat in an incident with chilling echoes of the 2015 Dadri mob lynching in Noida, also very close to Delhi.

Just like Dadri, the police were faster at sending the meat to a lab for testing than catching any one of the suspects. One of the assailants – Pradeep Yadav- has been arrested. The video of the incident recorded by witnesses shows the faces of the assailants. 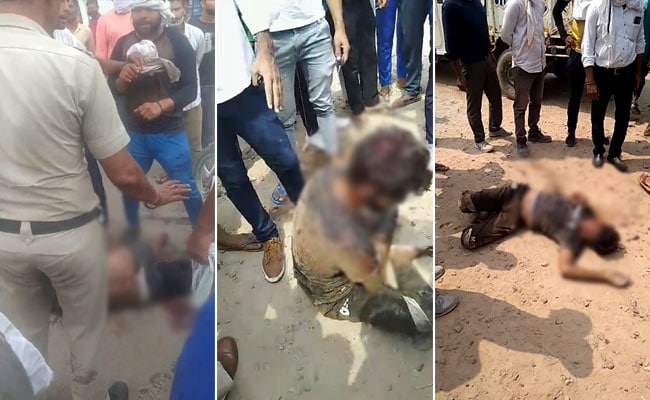 The police were seen doing little to stop the attackers.

After being beating to an inch of his life, Lukman was bundled into the pick-up truck and taken back to Gurgaon’s Badshahpur village where the men started thrashing him again.

This is when the police stepped in and stopped them – only to find the assailants fearless enough to even take on them.

Lukman was taken to a hospital and the police filed a complaint against “unidentified individuals”.

The owner of the vehicles said that the meat was buffalo and he has been in the business for 50 years.

So far, the police have refused to give a statement on record on the incident and explain their inaction as seen on video.

Slaughter of cows, considered sacred in Hinduism, is illegal in most of India and several vigilante groups take to enforcing the law themselves, often violently. In most cases, the victims of the mob beatings are Muslim.

In 2017, after a steady rise in attacks by these groups over three years, Prime Minister Narendra Modi had spoken out about the incidents, saying that killing people out of devotion for cows is not acceptable.