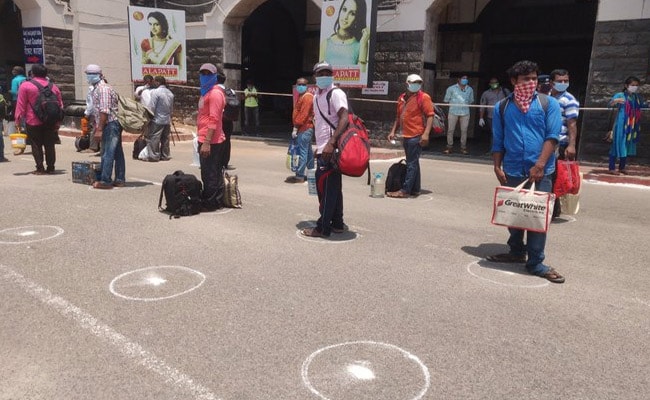 Coronavirus: Migrant workers in Kerala prepare to board a train to return to their states

Some 7,000 migrant workers will be homebound from Kerala as they begin their journey to states like Bihar, Odisha and Jharkhand, among others. In Kerala’s Thiruvananthapuram, the police and district administration have ensured that migrants maintained social distance in buses that were bringing them to the railway station, and even while waiting in the queue in designated circles drawn on the ground.

Each of the migrant workers arriving had a token in hand, indicating that they had medical clearance from the health workers at their respective camps, among other requirements, to board the train. At the railway station, migrants went through another round of health screenings.

On the ground, top police officers and the district collector were present and they ensured that social distancing and other norms were strictly followed.

“We are ensuring that they are given three masks, soaps for their journey. They have been given two packed meals for today and from tomorrow the state will provide meals for them through IRCTC (railway catering). There are also 20 personnel from the Railway Protect Team traveling with them to ensure guidelines are followed,” District Collector K Gopalakrishnan told NDTV.

“There are 15 counters open across the railway station to verify their records. The workers are being brought here in batches, so their entry is staggered and it’s doesn’t get crowded. We’ve formed teams with revenue, health and police officers all working together,” senior police officer Balram Kumar Upadhyay told NDTV.

Kerala is ensuring food for the entire travel period either through packed kits or through IRCTC.

However, the cost for the train tickets has to be borne by the migrants, and for many, it has not been easy.

Raju Kumar Mandal, a migrant worker, said he asked his parents to send him money. “I didn’t have money to buy ticket. I asked mummy and papa to send me money. I earned money from my work and sent them. They don’t do anything for a living,” he said.

Another migrant worker said he asked his wife to send him some money. She had saved it from what he had sent her.

Dharamveer, a young migrant worker, said he borrowed from a friend. “I borrowed the money from the person who used to live with me. He sent it into my account,” he said quickly as he moved ahead in the queue.