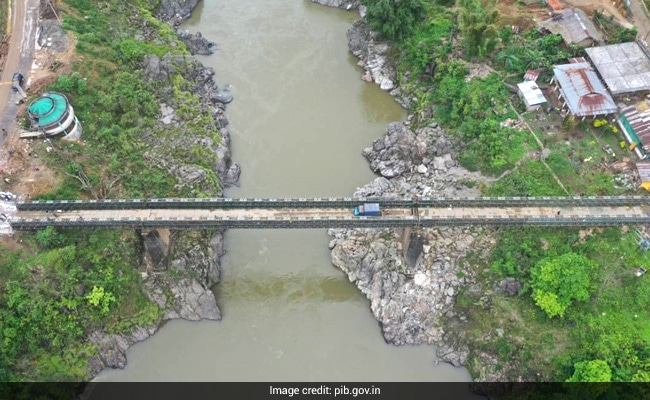 India has opened a new all-weather access near its border with China to enable faster movement of troops and artillery, another potential irritant in relations between the two nuclear-armed neighbours.

The new bridge, which can take 40 tons of weight, was built in Arunachal Pradesh, a region that has been claimed by China and near the scene of previous clashes. Border intrusions have risen 50% in 2019 compared to the previous year, people with knowledge of the matter said.

“That part of the border has always had a tendency to friction point between India and China. Lack of reliable and all weather connectivity was vulnerability,” said Nitin Gokhale, a New Delhi-based strategic affairs expert. “The new bridge and improved road overcomes that and ensures uninterrupted supply to troops.”

The new access along the border with China comes amid heightened tensions between the two nations after Beijing accused India of blocking its companies in the country after New Delhi tightened laws for foreign investors from acquiring local firms. The bridge is located in a region that witnessed a months-long military standoff in 2017 over the Doklam plateau, claimed by China and Bhutan, India’s ally. It was one of the most serious flare-ups since China won a border war with India in 1962.

China’s Ministry of Foreign Affairs did not respond to a message requesting comment.

India claims the Chinese army violated the 3,488 km long un-demarcated border, parts of which are disputed, over 600 times, the people said, asking not to be identified as the matter is not public.

“India and China have different perceptions of the border,” Indian Army spokesman Aman Anand said on Thursday. “Perceived transgressions are a result of the perceived boundary.”

Under Prime Minister Narendra Modi, India is ramping up its infrastructure along the border, which it says isn’t aimed at any particular country, but rather the development of remote border areas. It has completed 74 strategic roads along the eastern border, with plans afoot to finish 20 more by next year, the people said. It will reduce time taken to move and material by half and help 431 villages that lie across the region during the COVID-19 outbreak.

India tweaked its law on foreign investment by making it mandatory for companies from countries that share a land border to acquire local firms only after seeking an approval from the government. The move, which cuts the risk of opportunistic takeovers as the coronavirus outbreak drives down valuations of Indian companies, had so far applied only to FDI from Bangladesh and Pakistan. India shares its land border with seven countries, including China.

The new bridge also strides one of the main access routes of the Chinese Army into India from Tibet.