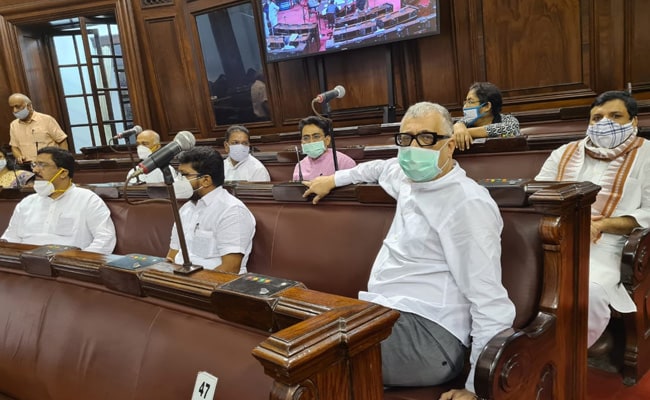 The Farm Bills, already cleared in the Lok Sabha, will go to the President before they can become law

Eighteen opposition parties wrote to the President today on what they called “absolute and total murder of democracy” in parliament in the way the government’s farm bills were passed on Sunday and urged him not to sign them.

“We, belonging to diverse political parties cutting across India’s political and geographical spectrum, bring this representation to you to respectfully draw your urgent attention to the absolute and total murder of democracy, ironically in the most hallowed temple of democracy, parliament,” said the letter to President Ram Nath Kovind.

“We pray that you return the bills and do not append your signature. We pray that you exert all powers, constitutional and moral, to ensure such a black law does not become law…”

Two of three farm bills that the government says will bring major reforms for farmers were passed in the Rajya Sabha on Sunday amid unprecedented chaos with opposition members climbing a table, flinging a rule book at him, tearing up papers and ripping out mics. Eight members were suspended today for “unruly conduct” but their refusal to leave the House led to five adjournments of the Rajya Sabha.

The Farmers’ Produce Trade and Commerce (Promotion and Facilitation) Bill seeks to give farmers the freedom to sell their produce anywhere in the country and the Farmers (Empowerment and Protection) Agreement of Price Assurance and Farm Services Bill, 2020 enables farmers to get into a contract with agribusiness firms, processors, wholesalers, exporters or large retailers for the sale of future farming produce at a pre-agreed price.

The bills, already cleared in the Lok Sabha, will go to the President before they can become law.

Leaders of 18 parties including the Congress, Left, NCP, DMK, Samajwadi Party, Trinamool Congress and the RJD said the bills are against the interest of farmers and will give power to corporates.

“On an issue like this, majoritarian, insensitive, and uncaring governance has no role at all and all stakeholders have to listen, absorb and imbibe and thereafter act with humility. There is no place for politics of zid (stubbornness) and arrogance,” said the letter, accusing the government of “ramming legislation down the throat of disagreeing parliamentarians without allowing it to be tested freely and fairly by vote by division”.

The parties said the “egregious and brazen acts” of the government, “in clear collusion with the legislative organ of our republic, is also proof positive of lack of numbers and lack of support with the government on passage of bills”.