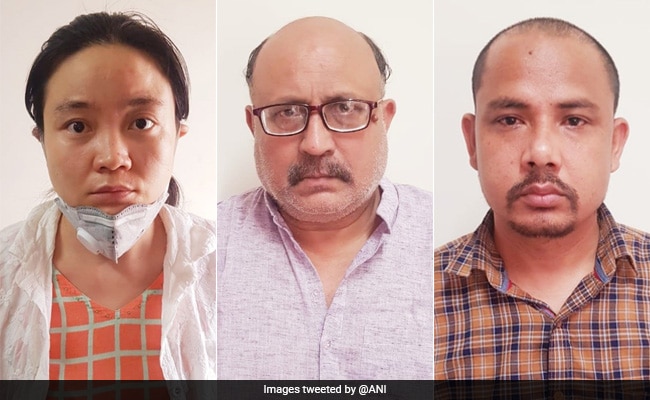 A Delhi-based freelance journalist who gave sensitive information about India’s border strategy and army deployment to Chinese intelligence has been arrested, the police said on Saturday, claiming to have a busted a major spying operation amid soaring tensions between the two countries.

The Delhi Police said it has also arrested a Chinese woman and her Nepalese associate, and claimed that they were paying huge amounts of money to the freelance journalist Rajeev Sharma for allegedly providing sensitive information.

“Special Cell has arrested a freelance journalist, Rajeev Sharma, for passing sensitive information to Chinese intelligence. One Chinese lady and her Nepalese associate have also been arrested for paying him large amounts of money routed through shell companies. Chinese intelligence tasked the journalist for conveying sensitive information in lieu of large amounts of money,” the police said.

“Huge number of mobile phones, laptops and other incriminating and sensitive material have been recovered,” the police said.

Mr Sharma, a journalist accredited with the Press Information Bureau (PIB) who lived in Delhi’s Pitampura, was arrested by the Special Cell of the Delhi Police on Monday.

“He was found to be in possession of some classified defence-related documents. The investigation is in progress and further details will be shared in due course,” senior police officer Sanjeev Kumar Yadav had said on Friday.

According to the police, Mr Sharma was getting $1,000 for each piece of information and was paid Rs 30 lakh in one-and-a-half years. He wrote on defence-related issues for China’s Global Times and was contacted by Chinese agents in 2016, the police said.

Sharply criticising the arrest the “well-known independent journalist of long standing”, the Press Club of India (PCI) called the move “high-handed” and alleged that it “may be inspired by obscure or questionable considerations”.

“This is on account of the dubious track record of the Special Cell. More generally also, the record of Delhi Police is hardly a shining one,” it said.

“Of late, Delhi Police, including its Special Cell, have made preposterous arrests under the lawless law called UAPA (Unlawful Activities (Prevention) Act) in which the word of the government is enough to keep an innocent person behind bars for long periods. These have happened in matters relating to anti-CAA (Citizenship Amendment Act) protests and the carefully designed communal killings in the so-called February 2020 riots in northeast Delhi,” the PCI said.

The arrests come amid a months-long border standoff between India and China in Ladakh that peaked on June 15, when 20 Indian soldiers were killed in the line of duty – a first in more than four decades. Even after that, there have been repeated attempts by the Chinese troops to recapture the heights occupied by the Indian soldiers.

(With inputs from PTI)