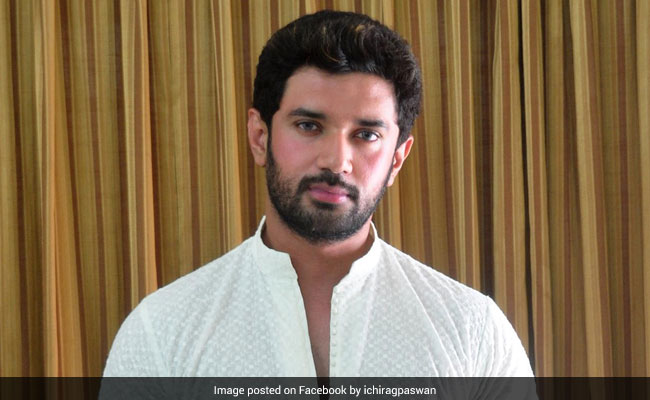 Holding assembly polls in Bihar – hit by the coronavirus pandemic – could endanger voters and politicians alike as they could contract the deadly infection while campaigning or casting votes through shared electronic voting machines, BJP-JDU ally Chirag Paswan said in a letter to the Election Commission today, demanding this year’s elections must be deferred. The letter could prove to be yet another point of conflict among the National Democratic Alliance partners as it backs the opposition’s similar demand.

“The COVID-19 pandemic has taken a formidable form. Experts believe by October-November, its effect in Bihar will be worse. At this time, our priority should be to save people’s lives, not to conduct elections…A big chunk of Bihar is hit by floods. Conducting elections as per the ICMR’s guidelines will be extremely difficult,” the Lok Janshakti Party leader wrote.

Questioning how voting will be carried out safely amid the rapid increase in the number of coronavirus cases, Mr Paswan said those already positive will not get a chance to exercise their right.

“Bihar’s population is 13 crore out of which 8 crore are voters. It will be impossible to make them vote while maintaining social distancing…how will those infected caste votes? What about containment zones where movement of people is banned?” he said.

Bihar has reported 48,477 coronavirus cases so far, including over 280 deaths. Several social media reports have claimed widespread mismanagement in the state-run hospitals.

“Currently providing relief to COVID-19 patients and people hit by floods should be the top priority. Those affected by floods must be rehabilitated and our health services should be improved. The state’s resources must be spent on improving lives of the people of Bihar…” he added.

Chief Minister Nitish Kumar has been facing almost daily attacks from the opposition RJD, which says the state government is playing down the coronavirus situation so assembly elections can be held on time.

“They are only worried about their seat. The BJP is doing their virtual rallies, the Chief Minister is doing his virtual rallies. But they are not standing with the poor people of Bihar. The poor are dying. There is devastation everywhere. But they are only worried about their kursi. They are preparing for the election,” RJD’s Tejashwi Yadav, who is also the leader of the opposition in the Bihar assembly, had said earlier this month.

Mr Paswan had tweeted similar sentiments, saying there could be a major dip in polling percentage if the elections were held amid the pandemic. He had also questioned the Nitish Kumar government over actor Sushant Singh Rajput’s death investigation, saying the Chief Minister needed to be “more active”.

The BJP has declared Nitish Kumar the chief ministerial face of the ruling NDA for the Bihar election.

In May, Mr Paswan had remarked that he would support the BJP “whether it goes with Nitish Kumar’s leadership or changes its mind”.

Recently, the LJP leader removed a party leader for putting out a statement that the NDA was united in Bihar.