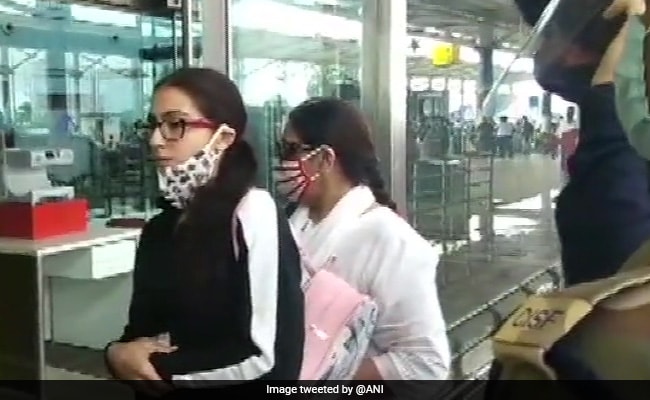 Sara Ali Khan was seen at the airport with her mother Amrita Singh, a veteran actor.

Actors Deepika Padukone and Sara Ali Khan flew back to Mumbai from Goa today, a day after they were summoned in a drugs probe related to the Sushant Singh Rajput death investigation.

Two more actors, Shraddha Kapoor and Rakul Preet Singh, have also been summoned by the Narcotics Control Bureau in the widening probe into drug allegations related to the film industry.

Deepika Padukone, 34, was reportedly in Goa for on a film shoot.

Sara Ali Khan, 25, was seen at the airport with her mother Amrita Singh, a veteran actor, and her brother Ibrahim. Her father is actor Saif Ali Khan. She had been in Goa for weeks on a family vacation when the drugs case exploded.

The names of various stars have cropped up in WhatsApp chats revealed in the investigation into the death of actor Sushant Singh Rajput, 34, on June 14. The investigation, involving multiple agencies, has captivated the nation, throwing up almost daily twists and wild speculation and campaigns on social media.

The Narcotics Control Bureau started its probe based on chats retrieved from the phone of arrested actor Rhea Chakraborty, who dated Sushant Singh Rajput in his final months.

During her interrogation before arrest, Rhea Chakraborty reportedly named stars including Sara Ali Khan and Rakul Preet Singh in connection with drugs use.

Sara Ali Khan was also Sushant Singh Rajput’s co-star in the “Kedarnath”; Sushant Rajput developed the drugs habit while shooting the film, according to Rhea Charkaborty’s bail petition before the Bombay High Court.

The names of Deepika Padukone and Shraddha Kapoor were found in WhatsApp chats on the phone of Jaya Saha, Sushant Singh Rajput’s talent manager and a top executive of talent firm Kwan.

Jaya Saha has also been questioned by the drug probe agency.