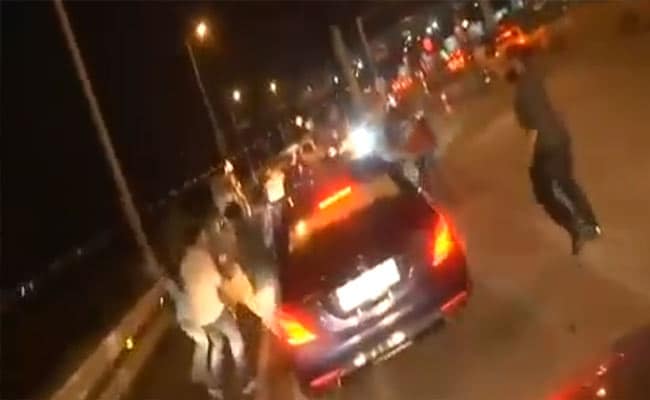 Actor Deepika Padukone and her husband Ranveer Singh walked into a big crowd of waiting reporters after their flight from Goa landed in Mumbai on Thursday night. What unfolded once they entered their car and drove home had parallels to the media frenzy on the day actor Rhea Chakraborty first came out to appear before investigators in a drugs case and the chaos sparked by reporters inside a plane when actor Kangana Ranaut was flying from Chandigarh to Mumbai.

In visuals, media cars are seen closely trailing Deepika Padukone and Ranveer Singh as they drove out of the airport. At a traffic signal, some reporters are seen coming out of their vehicles and standing near the bonnet of the couple’s car. One of them even knocks at the car in an attempt to draw a response from the actor couple.

The media cars continue to follow the actors on Mumbai’s roads and flyovers all the way to their house.

Apart from Deepika Padukone, Sara Ali Khan also flew back to Mumbai from Goa, a day after they were summoned in a drugs probe related to the Sushant Singh Rajput death investigation.

Two more actors, Shraddha Kapoor and Rakul Preet Singh, have also been summoned by the Narcotics Control Bureau in the widening probe into drug allegations related to the film industry.

Deepika Padukone is likely to go for her questioning on Saturday. Sara Ali Khan and Shraddha Kapoor will also be questioned on Saturday. Rakul Preet Singh, who was to appear before the anti-drugs bureau today, will be questioned today.

The Narcotics Control Bureau started its probe based on chats retrieved from the phone of arrested actor Rhea Chakraborty, who dated Sushant Singh Rajput in his final months.