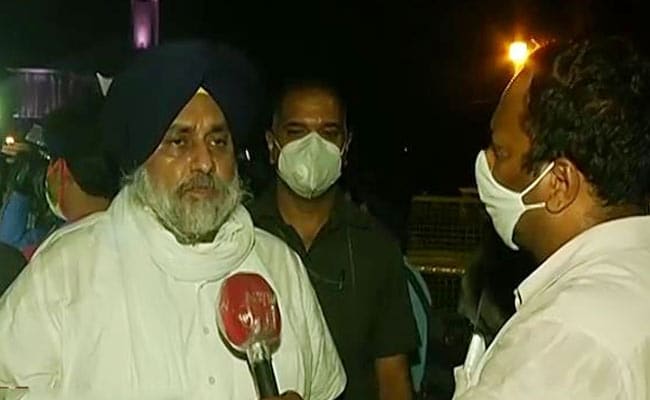 Sukhbir Badal said the Akali Dal had voiced concerns about the farm bills from Day One.

The oldest ally of the BJP, the Shiromani Akali Dal, will review its membership in the ruling National Democratic Alliance (NDA), party chief Sukhbir Singh Badal said on Thursday soon after his wife Harsimrat Kaur Badal resigned as a union minister in protest against the government’s agricultural bills that have spurred massive resentment among its all-important voter base of farmers.

“From the Day One when the ordinances were brought into the cabinet, Harsimrat Kaur Badal strongly opposed it and put forward her views that the people of Punjab are concerned with the ordinances. Especially, the farmers should be consulted. But they passed it,” he told NDTV outside parliament.

“We are sad that the government of India brought this bill without a dot of change. You cannot be a part of the government which has not looked into the rights of the farmers. We spent two months trying to convince the government. But now since the bill is done, we cannot go back,” Mr Badal said.

Asked whether the Akali Dal would continue its alliance with the NDA, he said, “We are the founder members of the NDA. But with the situation, our party will meet. We will look at the situation. In our party there is a core committee which takes all the decisions. Let us see what the action is.”

The bills – which the BJP claims is big ticket reform in the agri-sector – have hugely upset the farmers of Punjab and Haryana, who have been holding protests for weeks, saying that the changes will hit their earnings.

The Akalis, who initially supported the laws, made a U-turn this week after realising the depth of the farmers’ resentment. The party had appealed to the centre to hold off the bills till the concerns of the farmers are addressed.

Punjab Chief Minister Amarinder Singh of the Congress, however, pointed out that the Akalis still stand with the BJP and called Harsimrat Kaur Badal’s resignation a “gimmick”.