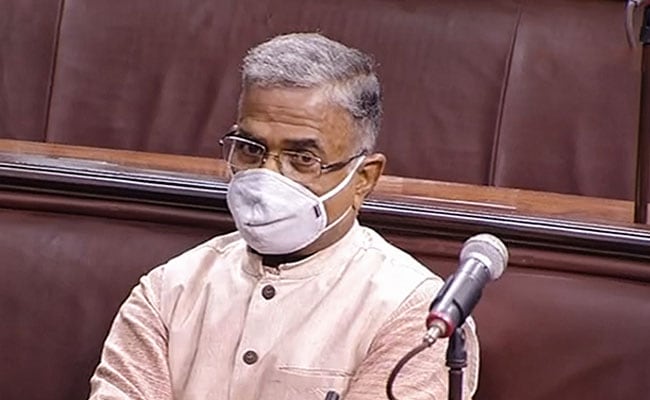 Rajya Sabha Deputy Chairman Harivansh has declared a one-day fast till tomorrow, expressing anguish over opposition attacks in parliament during the vote on the government’s farm bills.

Harivansh announced his fast shortly after he met eight Rajya Sabha opposition members protesting on the lawns in the parliament complex and offered them tea, a gesture that the parliamentarians snubbed. The eight members were suspended yesterday over the unprecedented drama in the Rajya Sabha over the farm bills on Sunday, when Harivansh was chairing the proceedings.

In letters to President Ram Nath Kovind and Vice President Venkaiah Naidu, Harivansh wrote that he “will observe a one-day fast till tomorrow as he was anguished over opposition attacks in the House”.

On Sunday, opposition members upset with Harivansh for rejecting their call for division of votes on the farm bills that were passed by voice vote, rushed to the centre of the House and protested. Two members climbed a table in front of him, a member flung a rule book and papers were torn.

“After what happened on Sunday, I have been extremely anguished, distressed and in mental agony and have been unable to sleep for the past two days,” Harivansh wrote in his letter.

“In the name of democracy, opposition members behaved in a violent manner and there were attempts to intimidate the Chair,” he wrote.

The 64-year-old, who was recently appointed deputy Chairman of the Rajya Sabha for the second time, said: “Whatever happened in front of me on September 20 has caused unimaginable loss to dignity of House… The rulebook was torn and thrown at me. Some MPs also stood on the table, used unparliamentary language against me. I kept recalling the entire incident and was unable to sleep.”

He referred to iconic Bihar leaders like Ram Manohar Lohia and Karpuri Thakur and added he was from Jayprakash Narayan’s village. “I learnt a lot from him, I took part in JP Movement and my political background is from Bihar where the Vaishali Republic is known for democracy,” he said.

The reference to Bihar, which will vote soon for a new assembly, is significant at a time campaigning has picked up pace.

Prime Minister Narendra Modi also came out in support of Harivansh in his tweets, praising the “inspiring and statesmanlike conduct” of “MP from Bihar and Rajya Sabha Deputy Chairperson Shri Harivansh Ji”.

To personally serve tea to those who attacked and insulted him a few days ago as well as those sitting on Dharna shows that Shri Harivansh Ji has been blessed with a humble mind and a big heart. It shows his greatness. I join the people of India in congratulating Harivansh Ji.

For centuries, the great land of Bihar has been teaching us the values of democracy. In line with that wonderful ethos, MP from Bihar and Rajya Sabha Deputy Chairperson Shri Harivansh Ji’s inspiring and statesman like conduct this morning will make every democracy lover proud.

Describing the Rajya Sabha Deputy Chairman’s letter to the President as “inspiring and praiseworthy”, the PM – who tweeted the letter – urged “the people of the country to read it”.

Opposition parties accuse Harivansh of steamrolling their objections and helping the government push farm bills in Rajya Sabha despite the lack of numbers.

Harivansh had overruled opposition demands to extend the debate on the farm Bills or even refer them to a select committee.