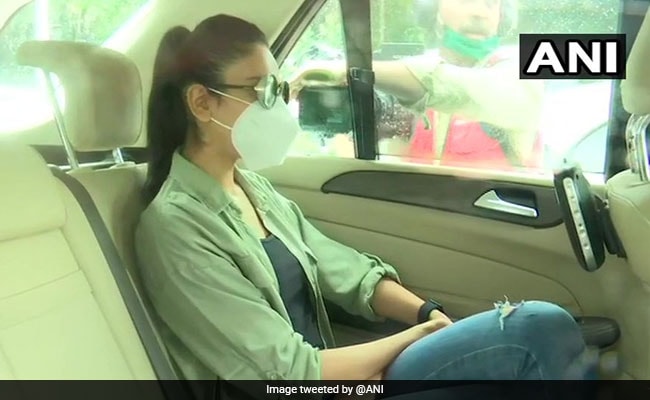 Actor Rakul Preet Singh has reached the Narcotics Control Bureau (NCB) office to record her statement in connection with the agency’s probe into the alleged Bollywood-drugs nexus.

This is the first time the 29-year-old actor has appeared for questioning before the anti-drug agency that launched an inquiry following chats retrieved from the phone of arrested actor Rhea Chakraborty.

Besides Rakul Preet Singh, Deepika Padukone, Sara Ali Khan and Shraddha Kapoor have also been summoned by the NCB in its widening drug probe related to the Sushant Singh Rajput case, which has thrown up a drugs and Bollywood twist after some incriminating WhatsApp chats were found by investigators.

Rakul Preet Singh and Sara Ali Khan’s names emerged during questioning of Ms Chakraborty, who was arrested on September 9 on charges of buying drugs.

Rhea Chakraborty, who is currently housed at the Byculla Jail in Mumbai, has been accused of “being an active member of a drug syndicate” and organizing drugs for Sushant Singh Rajput, who she dated in his final months.

Ms Chakraborty has denied the allegations levelled by the NCB that she is an active member of a “drug syndicate”.

The names of Deepika Padukone and Shraddha Kapoor were revealed in WhatsApp chats retrieved from the phone of Sushant Singh Rajput’s talent agent Jaya Saha, who is also being questioned by investigators. The chats suggested that the actors had used drugs.

Deepika Padukone has been summoned tomorrow and Sara Ali Khan and Shraddha Kapoor on Saturday.