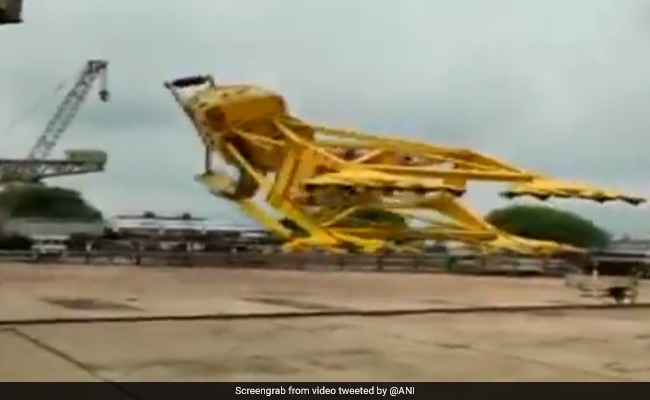 A massive crane collapsed at the Hindustan Shipyard Limited premises in Visakhapatnam.

Nine people have been killed and one person seriously injured after a massive crane collapsed at the Hindustan Shipyard Limited complex in Visakhapatnam in Andhra Pradesh today. The crane collapsed during load-testing trials.

Four of them were shipyard employees and the rest were contract staff, Visakhapatnam police commissioner RK Meena told NDTV.

An eight-second video showed the giant yellow crane crashing down on the ground at the shipyard.

An ambulance and police vehicles were seen rushing into the shipyard complex.

Hindustan Shipyard Limited, located in the coastal city in Andhra Pradesh, is a government undertaking, involved in shipbuilding and catering to the needs of shipbuilding, ship repairs, submarine construction and refits as well as design and construction of offshore and onshore structures.

This is the latest industrial accidents to take place in Visakhapatnam, nearly three months after 11 people, including two children, were killed and over 1,000 were left sick after gas leaked at a chemical plant – LG Polymers facility – in Visakhapatnam.

On June 30, two people were killed and four were hospitalised after gas leaked at a pharmaceutical unit in the port city. In July, a major fire broke out following an explosion at another pharmaceutical unit near Visakhapatnam, leaving at least one worker injured.