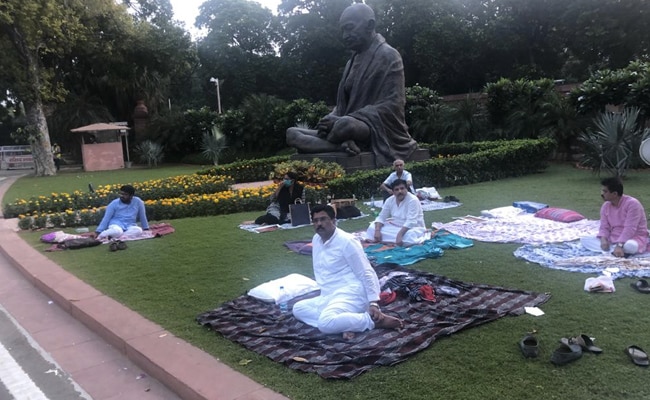 Eight opposition members of the Rajya Sabha were suspended on Monday for the rest of the session over the chaos in the House during Sunday’s passing of the farm bills. However, the members, including Trinamool Congress’s Derek O’Brien, Aam Aadmi Party’s Sanjay singh, Congress’s Rajeev Satav and CPM’s KK Ragesh, refused to leave.

Hours later they did eventually depart, but went only as far as the parliament lawns, where they spread out sheets and staged a sit-in holding up placards that read – “We will fight for farmers” and “parliament assassinated”.

The MPs spent the night on the lawns of the parliament building before joining other opposition leaders to walk to President Ram Nath Kovind’s official residence to bring his attention to the issue.

The suspended members, who were told they had displayed “unruly behavior especially with the Chair and gross disorderly conduct”, had refused to leave the House while the opposition protested loudly against the action, causing five adjournments of the Rajya Sabha.

The opposition said the members should have been given a chance to explain and demanded a vote on their suspension, but the Rajya Sabha said the decision was based on a government motion.

But the eight suspended MPs didn’t budge, even after the house adjourned, and one of them even called for a blanket and pillows for an overnight stake-out. Later, they protested on the lawns of the parliament complex.

The opposition, which lacked the numbers to block legislation, had called for the farms bills to be sent to a select committee for review. They had also asked for the discussion to be extended. Harivansh Singh refused and allowed Union Agriculture Minister Narendra Singh Tomar to continue his reply before voting on the bills.

The manner in which bills were passed on Sunday was “murder of democracy”, said the opposition.

The government says the bills will make it easier for farmers to sell their produce directly to big buyers, reform antiquated laws and remove middlemen from agriculture trade, allowing farmers to sell to institutional buyers and large retailers. But the opposition argues that farmers will lose their bargaining power if retailers have tighter control over them. The parties also believe the proposed laws will destroy wholesale markets which ensure fair and timely payments to farmers, weaken the state’s farmers by ranging them against big business, and hit the overall state economy.