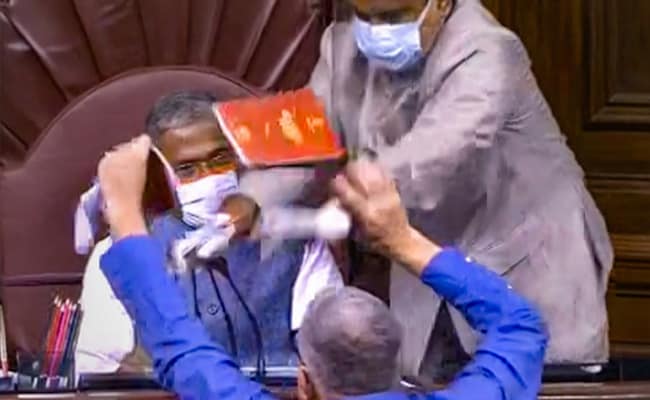 Eight opposition members were suspended from the Rajya Sabha this morning for the rest of the session over unprecedented chaos in the house during the passing of controversial farm bills on Sunday, but they refused to leave. The members, including Trinamool Congress’s Derek O’Brien, Aam Aadmi Party (AAP)’s Sanjay singh, Congress’s Rajeev Satav and CPM’s KK Ragesh, were told they had displayed “unruly behavior especially with the Chair and gross disorderly conduct”.

The refusal of the suspended members to leave the house caused multiple adjournments of the Rajya Sabha until it was forced to close for the day. The opposition said the members should have been given a chance to explain, but the Rajya Sabha said the decision was based on a government motion.

But none of the members budged.

The row escalated when the opposition demanded physical voting but Harivansh Singh refused. Opposition members ran to the Chair, attempted to tear up the rule book and tried to snatch the Deputy Chairman’s mic.

A voice vote took place amid slogans from the opposition.

Opposition MPs sat on protest in the house, preventing the start of the Lok Sabha shift.

Nearly 50 members moved a no-confidence motion against Harivansh Singh, which was rejected today.

“This does not end here,” Derek O’Brien had said on Sunday, terming it a “murder of democracy”.

“They cheated. They broke every rule in Parliament. It was a historic day. In the worst sense of the word. They cut RSTV feed so the country couldn’t see. They censored RSTV. Don’t spread propaganda. We have evidence,” Derek O’Brien tweeted.

During the discussion on the bills, the government said the Farmers’ Produce Trade and Commerce Bill and the Price Assurance and Farm Services Bill will bring major reforms in the lives of the farmers.

After the bills were passed, Prime Minister Narendra Modi tweeted: “For decades, the Indian farmer was bound by various constraints and bullied by middlemen. The bills passed by Parliament liberate the farmers from such adversities. These bills will add impetus to the efforts to double income of farmers and ensure greater prosperity for them.”

The opposition alleges that the proposed laws will give power in the hands of corporates and farmers will be deprived of fair price for their produce.